Liberal versus conservative. Orthodox versus heterodox. Affirming versus non-affirming. Traditional versus progressive. Each of these labels for a person’s theological convictions about sexuality are loaded and create early barriers to conversation about loving gay people. And they each set up a dichotomy: there are only two perspectives, so choose!

A person who has a revisionist perspective (sometimes called Side A) on Christian sexual ethics typically believes the following:
Its name is taken from the theological maneuvering, or revising, needed to believe that the six “clobber passages” specifically and the whole of Scripture generally aren’t speaking to modern-day same-sex relationships. The revisionist believes that God makes people gay, and that God blesses same-sex marriages in the same ways He blesses opposite-sex marriages. Most revisionist gay Christians I know believe that the Bible is not binding or prescriptive for a modern context.

Now let’s talk about the historic perspective (sometimes called Side B):
Its name is taken from the fact that the global Church has historically held to this perspective on sexual ethics. The historic sexual ethic is this: Same-sex attraction is not what God intended and is a result of the Fall. But, we do not choose who we are attracted to and there is no formula for changing one’s attractions. There is no context for same-sex sexual or romantic activity that God blesses, so they are sins. God calls all Christians to vocational singleness or marriage with someone of the opposite sex. Gay Christians may identify as “gay” in a limited way, finding it helpful to identify with those of a shared heritage and similar life experiences. (Equip holds and teaches the historic sexual ethic.)

And finally, there is the pray-the-gay-away perspective (sometimes called Side X):
Those who hold this sexual ethic believe that same-sex attracted Christians must reject their attractions and work toward changing their attractions (“ex-gay”). Continuing to experience same-sex attraction is a sign of willful disobedience and/or lukewarm sanctification. Homosexuality in any form is sinful. God intends for all people to marry someone of the opposite sex.

What a church actually does is more important to gay Christians. So what does it look like for a church to embody each of these sets of beliefs?

Revisionist churches teach from a young age that God made some people gay and some people straight—regardless, He desires for all of us to enjoy romantic companionship with people we are attracted to. These churches encourage same-sex attracted children to identify as gay and proudly share that with family and friends. Revisionist churches often only use the Bible in limited ways—when it aligns with a humanist ethic that they believe God has revealed to mankind through human reasoning. These churches do not talk about vocational singleness or support it in any meaningful ways, and why would they? God has offered marriage as the solution to loneliness and you can marry whomever you want.

Churches that hold to a historic sexual ethic talk about sexuality and the brokenness of everyone’s sexuality from a young age. These churches recognize that while some people will develop same-sex attraction, they are still loved by God and have a beautiful role in His story, and they encourage same-sex attracted children to share early with parents and pastors so that they can learn to steward their sexuality in God-honoring ways. These churches are places that talk in theologically accurate ways about celibacy and marriage, and both celibacy and mixed-orientation marriages are normalized, supported, and modeled in the church for gay Christians.

Pray-the-gay-away churches make clear that God is against homosexuality, but say little more. If a gay teen comes out to his or her parents, the child is connected with therapists and para-church ministries to help the child become straight. They are commanded to reject homosexuality in all forms. This rejection looks like avoiding gay people and culture, identifying as straight, fleeing from and ignoring any “gay thoughts,” and seeking out marriage with someone of the opposite sex. Christians who continue to experience same-sex attraction are challenged to lean farther into their spiritual disciplines and a romantic relationship with someone of the opposite sex. These churches do not talk about celibacy or support it in any meaningful ways, because marriage with someone of the opposite sex is God’s answer to loneliness.

After nearly 5 years of equipping pastors and churches, what have we found? Most churches believe something closest to the historic sexual ethic but embody something closer to a pray-the-gay-away ethic. I’ve yet to meet a church that both believes and embodies a historic sexual ethic. This is a problem. Churches with historic beliefs but pray-the-gay-away practices don’t teach what the Bible has to say about lifetime singleness, they wait until teens come out to talk about homosexuality, they dog-whistle hope for change in people’s attractions, they discourage gay people from talking about their story publicly, and they outsource their care for gay people to therapists and para-church ministries.

Functionally, the Church is only offering gay Christians revisionist ethics or pray-the-gay-away ethics. If these are the only two options practically available, are we surprised that people choose the revisionist perspective? If it seemed to you that your only options were shame, depression, and suicide (pray-the-gay-away) or romantic companionship with someone you’re drawn to even if you doubt God approves of your relationship (revisionist), which would you choose? We desperately need for churches to do what it takes to embody the historic sexual ethic and offer gay Christians a middle way where they can enjoy deep intimacy and belonging in the body of Christ while honoring God with their bodies.

Do you notice anything peculiarly similar about revisionist and pray-the-gay-away perspectives? Read the beliefs and actions of those two churches again. There’s one big thing they have in common: they both believe that God intends for everyone to marry someone, and as a result, they don’t teach about vocational singleness as a normative option and they don’t do what it takes to make celibacy viable. Both revisionist and pray-the-gay-away churches have been led away by the idol of romance. Both ignore Jesus’ words in Matthew 19 and Paul’s words in 1 Corinthians 7. Think about this next time you invite a gay person to consider celibacy. Is your church actually a place where they could thrive in lifetime singleness? Are there other people already modeling that? Do you teach about the possibility of vocational singleness? Do you invite straight people to consider lifetime singleness and offer the question of marriage or celibacy to God?

Help your church truly embody a historic sexual ethic by getting your signature Equip Blueprint. Set up a Huddle today! What are Celibate Partnerships? Are They Wise? What Does Giving to Equip Empower?

Previous
Pastors, Please Don’t Look Away
Next
Is Singleness Good? 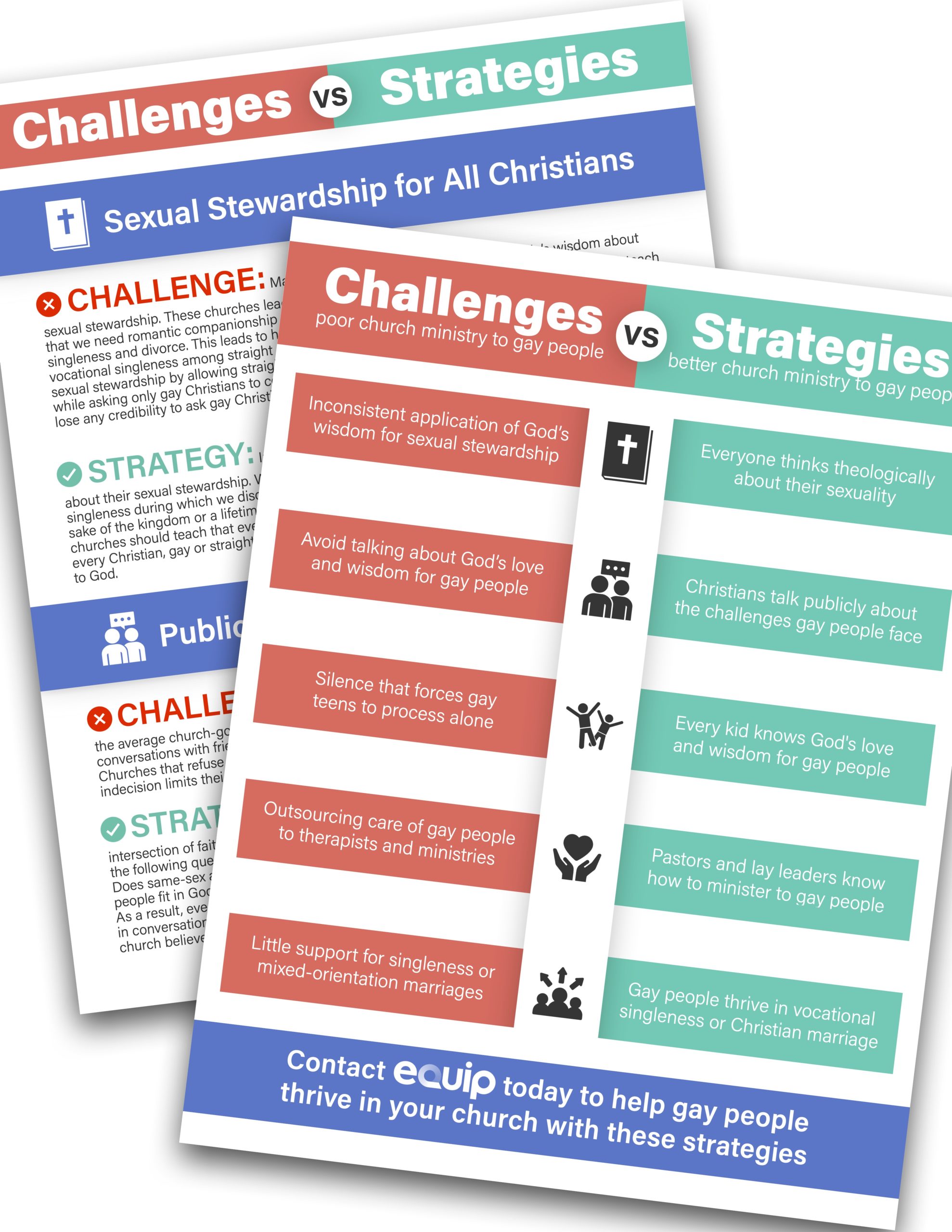 I’d like to set up a huddle with Pieter

Send me info about open trainings and courses